The Mount Shasta 2009 hike haunts me every day as it is one of the few hikes (almost considered a climb) that I have not achieved the summit.  Earlier this year David (the Turtle) and I attempted Mount Shasta on the lesser traveled Clear Creek Trail.  We planned on a two day summit attempt.  The first day we would get to a high camp and the second day to make our summit and descent down the mountain.  I believe that both of us were in good enough physical shape for the hike, however, the mountain got to us mentally.  You have to understand one simple fact about David and I before I go on.  We are hikers, not climbers.  Mount Shasta is that fine line between a hike and a climb.  We had to bring some specialized equipment with us to make our attempt.  This included ice axes and crampons.  Both of us had undergone some basic snow mountaineering training earlier in the year to prepare our skills for the hike, but it wasn’t the technical aspects of the hike that got us to turn around, it was the fact that we weren’t really having much fun after a certain point (which I will expound on a little later).  However, despite the problems and the setbacks, I will be back to this mountain in 2010 with some more company to help tame this beast. 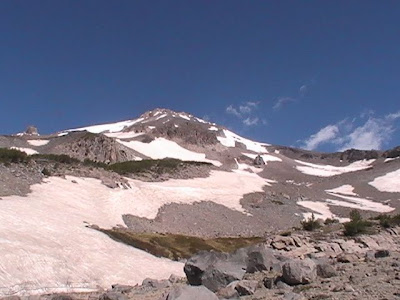 Mount Shasta is by far one of the most beautiful mountains I have hiked.  Not because of the wildlife or greenery, but because of the absolute scale of the mountain.  It sits alone in a valley with no other mountains even coming close to its height.  From all angles of the mountain you can get a view of places hundreds of miles away.  The views were absolutely breathtaking.  But, with the beauty comes great challenges.  The mountain is a volcano and has different terrain than some of the other mountains in California.  There are small loose rocks, sand, and other obstacles.  Plus, because it is such a lonely mountain it has its own weather system which can turn on a dime.

We decided to take the Clear Creek Trail to the summit.  We had researched the available routes to the top and decided that Clear Creek was for us.  There were several reasons for this decision mainly we wanted to avoid traffic jams and try to enjoy the mountain.  As luck would have it, we only saw a total of about 6 people the entire time on the mountain.  It was peaceful and beautiful.  However, with our choice of trails came one of the biggest struggles.  Since we were on a lesser traveled route the trail was not as well marked above 10,000 feet.  This was due mainly because of snow fields still on the mountain.  Because of the snow it became more difficult to find the correct route.  As such, we took a wrong path and ended up spending a couple extra hours going in the wrong direction.  Despite all of the set backs on this route, I will be going this way again in 2010.  I love the peace and tranquility of the mountain and the fact that we could select any camping spot we wanted.

There are several nice places to set up camp on this route.  We found a cool spote on a ridge with some nice bivy sites dug out with some wind shelters.  It was a good thing the wind shelters were there because the wind was fierce until about 10:30pm, then it stopped.

David and I made it to about 11,200 feet in elevation before calling it quits.  It was an amazing adventure and I am certain I will be going back on this trail again and will hopefully update this post with a story of success.

HOW TECHNICAL IS THE HIKE? 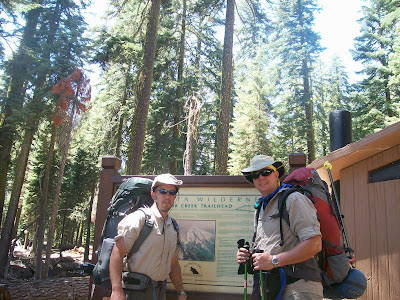 This is almost a climb and not a full hike because of the steep slopes, ice, and snow.  In addition to the technical aspects of the mountain you have to be able to deal with the altitude.  As I mentioned earlier, this hike isn’t super technical, but it requires some planning and training in advance.  It is a borderline ‘climb’ in my book.  The angles of ascent were fairly steep for long periods of time in the snow.  You will need to brush up on your map reading skills because the trail isn’t always well marked.  Make sure everyone in your group has a map.  One of the more difficult parts of the hike was coming down the mountain and maintaining good reference points to find our way out.  Luckily, I took pictures on the way up.  I would periodically turn around and take video or pictures of where we just came from.  I could use this as a reference on the way down to make sure we were on the right path.

WHO CAN DO THIS HIKE?
I wouldn’t recommend this hike to anyone under the age of 15.  It is a hike for those who have some experience in snow hiking and good map reading.  Throw into the mix the altitude and the hike can be very difficult.  The Clear Creek trailhead starts at about 6,000 feet and goes up from there.  Basically you are gaining about 1,000 feet per mile you travel.  You need to be in great physical shape to attempt this hike.

WHEN SHOULD I GO?
The best time to go are the months of June and July.  I say this because you will most likely have good weather and there should be enough snow on the mountain.  You actually want a fair amount of snow on the mountain to help get you to the top.  As I mentioned earlier this is a volcano with some different walking surfaces.  There is lots of scree and soft sand along the path where there is no snow so it makes for very slow hiking.  We went on the 4th of July weekend and the weather was great.  Plus, by taking the Clear Creek route we didn’t have to fight any crowds.  The permit process for the hike is very simple.  You don’t need any advance reservations.  We simply went to the Mount Shasta ranger station and took care of everything on the day we went.  You can also take care of the permits outside if you arrive after hours.

TRAINING ADVICE
Simply put, you need to get your body in great shape to do this hike.  I have been up Mount Whitney several times, and I have even done Whitney in a single day (22 mile round trip), but Mount Shasta surprised me.  It will work your legs and lungs the entire time.  Make sure you are prepared for the downhill fun.  I would recommend lots of training hikes with a full pack on.  I would especially recommend practicing with a pack on stairs.  This will help mimick the action of coming down the mountain and getting some stress on your joints to help build them up for the actual hike.  David and I did some pre-training with a company in the Sierras in May to give us the technical know-how to deal with steep hikes in the snow.  The training was well worth it and I would highly recommend that you take part in similar training.  It will help you decide if you really want to take a shot at Mount Shasta. 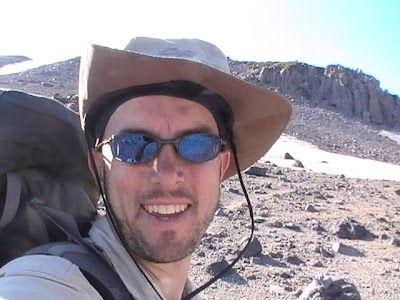